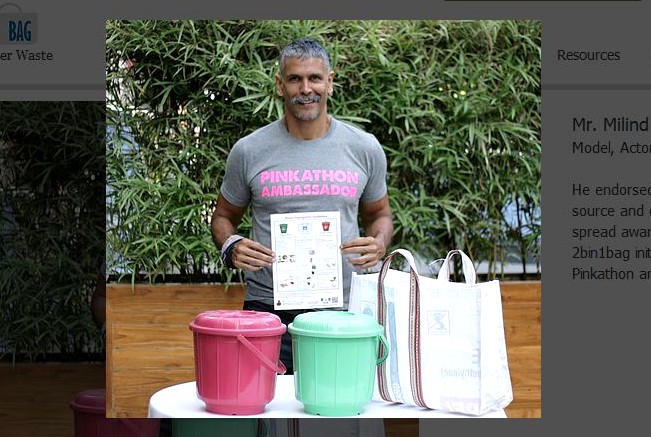 India’s struggle with garbage and its proper management became very much clear when Bangalore, the country’s well known IT capital of its modern economy, was drowning in its own waste.

As the city’s population exploded with the success of its tech industry, 2012 was a year when the stresses on the waste system came close to a breaking point. And with the last landfill in Bangalore, in Mandur, permanently getting closed, the city was running out of abandoned quarries to quietly divert its trash.

While there were a lot of non-profit groups and individuals doing something or the other to solve this problem, a group of women in the Bellandur area of Bangalore saw the solution in the segregation of waste and then treated it accordingly. They were looking for a solution that is sustainable and environmentally sound. And the concept of ‘2bin1bag’ was born.

In a conversation with Pinky Chandran, the founding member of the Solid Waste Management Roundtable (SWMRT), we got to know the whole concept behind this initiative, and how things are carried out at a ground level.

Speaking about the idea behind ‘2bin1bag’, Pinky tells how there was so much experimentation going on around the 3-way segregation of waste because people realised that this is the first major step towards curing the issue. But so many campaigns got them overwhelmed. New rules and awareness programs are everywhere and people don’t know what and how to follow. Bruhat Bengaluru Mahanagara Palike (BBMP), which is a civic body in Bangalore, came up with a lot of posters about how there should be 2 bins and a bag for proper segregation of waste, but again, it was not catchy enough.

Speaking of its name, she credits one of her colleagues, Lalita Mondreti, who is also a member of SWMRT, and Kasa Muktha Bellandur, for coining ‘2bin1bag’.

“The concept has existed but while we kept saying distribute bags for dry waste and all that, this was the period of 2012-14, when these things were coming about. So 2bin1bag, then it became like a campaign. It makes the whole concept of segregation very simple there. Because it says, okay, then you can associate there are 2 bins, where you put your wet waste, and you put your reject waste and then you put your dry waste. That was a major exercise. And then the Karnataka High Court also mandated the 3-way segregation on December 17, 2014.” She told The EarthView team while explaining the rationale behind the campaign, a volunteer-driven team from across different groups, supported by SWMRT.

When asked about the logic behind the colour-coding of bins and bags, Pinky told us how different colours symbolise something or the other and create a different psychological association in our minds. “So with the green bin, if you look at it, green stands for the renewal of life. It means nature and things like that and so we looked at green symbolically to look at your kitchen waste. That’s the whole concept behind the green bin.” She furthers while explaining the colour-coding. Similarly, red is a danger, alert, or hazard, so red is for any kind of domestic hazard waste, biomedical waste that you generate at home, the concept behind the red bin. And then the bag, the white one, is for all your plastic waste, paper, glass, metal, anything that can be recycled. “While the colour blue is for recycling when we looked at the bag option, white made more sense. And that’s why we looked at the white bag. And white also symbolises the safe colour”, she told.

She told us how the volunteers from Kasa Muktha Bellandur and SWMRT came together, created the entire website, changed the already created posters and FAQs for them came accordingly. People were already aware of the idea of 3-way segregation. It just had to come together as a campaign.“People will then understand the whole thing in a more simplistic form”, she said.

In terms of impact and how successfully it is being carried out, Pinky told us how the 3-way segregation rationale has now been adopted by the entire country, because of the intervention of the Karnataka High Court, and how instrumental it was in getting the 2016 Solid Waste Management Revised Rules. “Once the order has come in from the High Court, nobody can say no to it. The ‘2bin1bag’ is a symbolic approach, but the rationale of the 3-way segregation is the Karnataka High Court. has upheld what” she adds. From its approach to 3-way segregation, we can call it a “mass movement” across Bangalore and the rest of the country.

Answering how the campaign is going on in today’s time, and what’s the next big thing to focus on, Pinky tells us how on the ground, in terms of implementation, there is still a long way to go, but, after that, the next logical outlet is to promote home composting. And with the home composting, ‘Swachagraha’ came in, which stands for “clean planet.” The campaign encouraged people to start a green spot in their homes by using it for composting, growing, and cooking. There was also this Swachagraha Challenge with composting a week’s wet waste from their household, which took in several residents in Bangalore and they got into home composting.

The team also went ahead with launching the ‘Swachagraha’ Compost Connect Program, where they connected farmers to the apartment owners. Farmers can get the compost from what they have been home composting for some time, and when it’s ready, and use it as manure. All this is carried out via a WhatsApp group, wherein they have added apartment owners and farmers, along with other community members, and whenever compost is ready, members can drop a WhatsApp with their address, and the compost gets picked up from their door and sent to the farmers.

It was just impressive to see how a citizen level campaign, taking up a not so talked approach of 3-way segregation of waste, led to such great awareness and change in cities and across the country. The Karnataka High Court, on December 17, 2015, mandated the ‘2bin1bag’ system for all waste generators in Bangalore. In the last 7-8 years, the initiative has seen volunteers from different neighbourhoods in Bangalore and has conducted door-to-door campaigns. With its motto of “divide-and-conquer waste,” personalities like Mr Rahul Dravid and Mr Milind Soman also adopted and promoted the initiative.