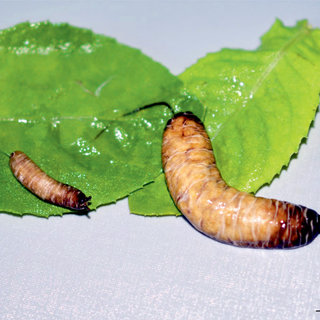 A native of South Africa, Purcell’s hunter slug or caterpillar slug, has now spread to many parts of India and, according to a new study, this will become invasive species that will attack western and Peninsular India.

An International Study published in March stated that invasive species have cost around 1.3 trillion dollars to the global economy since 1970 and an average of $26.8 billion per year. Invasive alien species are responsible for the extinction of native and endemic species, according to several studies.

An invasive species can be of any living organism like an amphibian, plant, insect, fish, fungus, bacteria or any organism’s seeds or eggs, which is not indigenous to the ecosystem and can cause harm to it. Invasive species can harm the environment or the economy or human health. Eleutherocaulis haroldi, known as caterpillar slug, is a species of tropical land from the family of Veronicellidae, the leatherleaf slug. It was first formally named Laevicaulis haroldi in 1980. Laevicaulis haroldi is listed as an endangered species. It entered India around 2010-2012 accidentally while international trade via Mumbai, according to studies. From all over the country, there are over 60 records of this invasive species. This slug feeds on the leaves and barks of mulberry plants; it was also seen on neem trees, papaya and calotropis plants.

The caterpillar was first reported feeding and causing damage to mulberry plants in Maharashtra. The research team from Ashoka Trust studied the distribution of this species for Research in Ecology and the Environment (ATREE) from the India Biodiversity Portal, iNaturalist website, and earlier studies. Invasive species can change the food web in an ecosystem by destroying or replacing native food sources. It can also alter the richness and diversity of species that are important habitats of native wildlife. Invasive species can negatively affect human health with new diseases.

ATREE also studied future climate change scenarios to decode places that may become vulnerable to slug attacks. “We used two scenarios for this purpose. One is scenario RCP 2.6 which is the best-case scenario to control emissions and limit anthropogenic climate change, and another scenario is RCP 8.5, which is the worst that could happen. Both scenarios are from Inter-governmental Panel on Climate Change (IPCC). We don’t follow any justification rules and have a high-risk future in terms of temperature and other climatic conditions,” explained Aravind N.A., associate professor at ATREE.

The highly suitable states for the slug under both scenarios are some states in Northeast India, most parts of Andhra Pradesh, Karnataka, southern parts of Telangana, northeast Tamil Nadu, Gujarat, western parts of Maharashtra, and coastal Odisha.