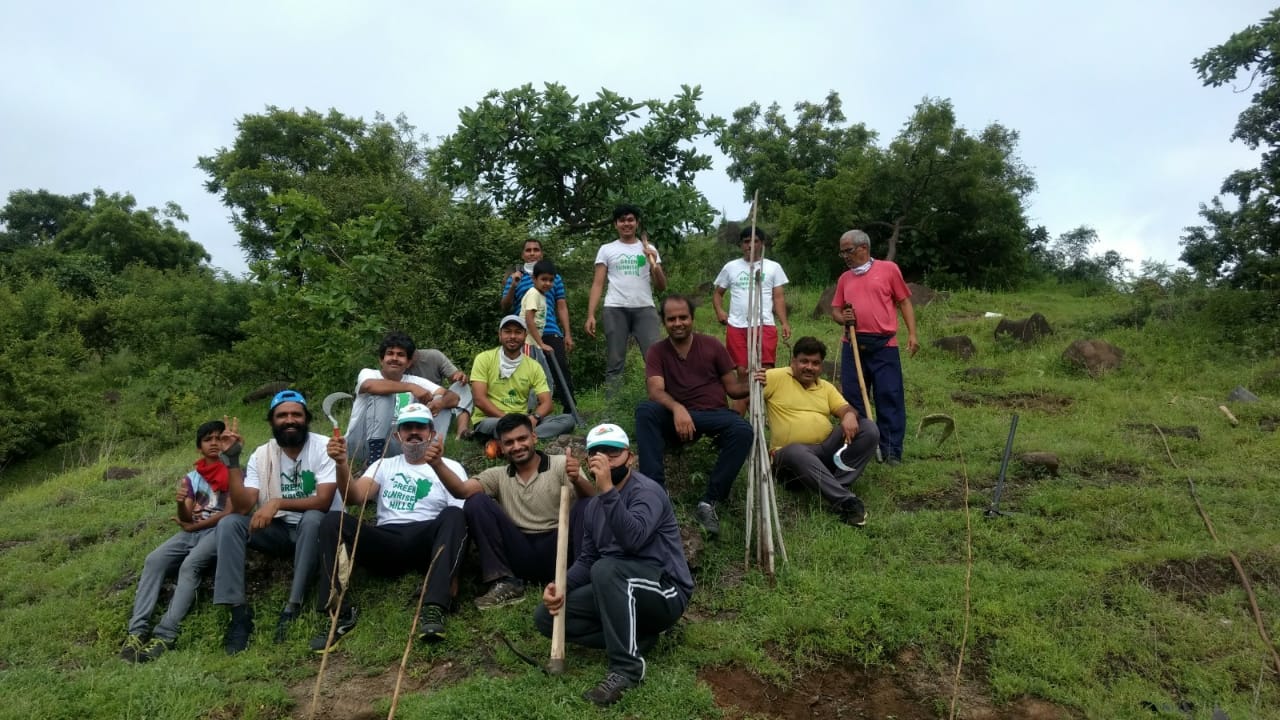 It is rightly said that the equal participation of citizens and community along with the administration can bring a difference to the society. Taking a cue from the same, Green Sunrise hills group, a resident group has nurtured a barren hill in Wagholi, Pune and replenished the greenery by planting 10000+ trees in last four years.

The group has undertaken the arduous task of converting the 40-acre barren hill located behind Ivy Estate, Wagholi, Pune into a dense forest in 2016. After four years, they have successfully converted around 20 acres of hilly terrain into a leafy thumb with the help of several volunteers and public campaigns.

While speaking to the EarthView, Chandrakant Naktode, founder of Green Sunrise Hills Group shared the four-year-long journey. He said, “We have started this initiative in 2016 to increase the green cover on the barren hill. This hill was special to me, as it’s near my home. So, I used to go to the hill to witness the sunrise in the morning almost every day. This bond steered me to form a group with the help of  few nature enthusiasts, Green Sunrise Hill Group in May 2016 and named this hill as Green Sunrise Hill.”

He further said, “The journey began on 5th July (Environment Day), when I along with my friends planted 3 plants on the hill. After four years, at present, we have planted more than 10000+ plants of 50+ natives such as Neem, Amla, Imli,” said Naktode. He further said, “The group aims to plant and nurture 25,000 plants on a hill by 2022.”

He also explained that the initiative aims to convert the hill into a hotspot for rich bio-diversity. Naktode added that the plantation and conservation activities are done under the guidance of plantation expert Kisan Gargote and the forest department.

“A survey of soil was done by Kisan Sir, and it was found to be forest land and fertile soil. Soon, we planted the native saplings as our aim is not only to increase the green cover but also to create an eco-system for birds and butterflies and therefore we are focusing on planting fruit and flowering native plants (parijat, mogra),” said Naktode.

A series of volunteer programs such as GSH Hillathon and mass plantation was carried to create awareness among the locals of the area. Naktode also expressed the challenges faced by the group while watering plants. He said, “The major question of watering the plants on the hill was a big problem for all us. It was not easier to water the plants in the early days. We carried cans on the hill to water the plants. Then established pipelines and motors, and lifted 5000 liters of the tank to the top of the hill. Further, we dig 2 ponds with a total capacity of 70,000 liters. And now there is a setup of automatic pumping from the foothill to the hill top to facilitate watering.”

In this fast thriving world, where most of the farmers use insecticides, pesticides, and fertilizers, Naktode took an account of complete organic farming for the assurance of the safety of nature and its elements. Jeevamrut and Natural Compost were key elements for the successful growth of plants on this hill.

Naktode who also worked with various student volunteers for the conservation works believes that the young generation should come closer to nature and understand the idea of sustainability. He said, “‘in the times to come, it will be the young generation who will sustain the idea of green and clean surroundings. It is also important that this sense of belonging towards the environment should be inculcated in schoolchildren.”

Even during lockdown after the outbreak of Covid-19, the conservation work was not halted as the volunteers proceeded with a planned manner to water the plants on hills during the peak of the summer season.

“Since the lockdown began in the peak summertime, two to three volunteers from our group ensured to water the plants every day or else all our efforts might go in vain. Our team ensured that all SOP’s for COVID are followed,” said Naktode.

“Conserving the environment is the need of the hour and We will continue practicing afforestation and other measures to promote a clean and green environment.,” said Naktode.

So, instead of having detailed seminars and presentations on ecology, we need to act and initiate such plantations. Over the period GSH has now evolved to be the name for community movements and people from all walks of life are committed to the protection of hill and nature.

Sabjikothi- A Unique Solution Towards Sustainability