Could Bananas Become A Green Alternative For Cotton Or Silk? 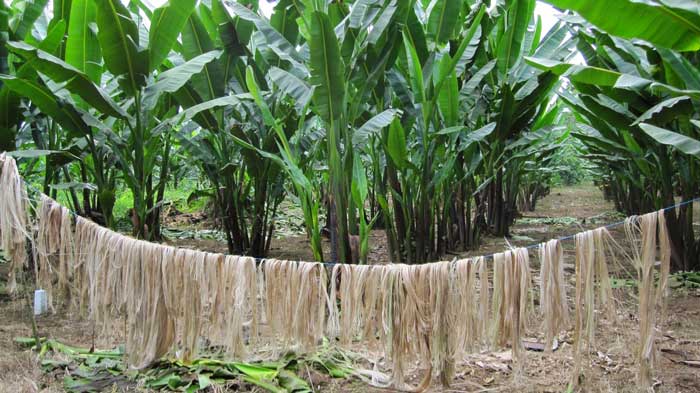 Could bananas become a green alternative to cotton or silk?

Bananas are one of the most liked and versatile fruits of all. But do you know, crops of these fruits are also one of the world’s most wasteful ones? The giant stems left after harvest action have nowhere to go. Some farmers try to burn them, but that ends up polluting the air.

But as the saying goes, where there is a will, there is a way, one company in Uganda has developed a technique to pulverise them into fibres, that can be used in making rugs, mats, and even hair extensions.

Before rotting or catching a virus, every banana stem fruit only once in its lifetime, producing 2 tons of debris for every ton of fruit.

Kimani Maturi, currently serving as managing director of TexFad, founded the company in 2013, after discovering his passion for handweaving back in his college days. He saw potential in all those mounds of banana waste. “I cannot finish using the waste that is out there. It’s too much”, he said while speaking about those piles of waste.

It starts with cutting the stems into celery-shaped chunks and then leaving them out to get sun-dried. Then the strands go into an extractor. This step is crucial and the only one requiring machinery, which is not cheap. It costs around $1000 for a used unit and $10,000 for a new one. Thus, price becomes an obstacle when it comes to expanding the business. All the other work is done by workers, by their hands.

The extracted fibres are left to dry again until they give the silky yarn a feel but are as strong as ropes. This point is also ideal for dying the fibres.

Finally, the fibre reaches the weaving shed where they are weaved into handicrafts and different household goods. The designs of these rugs resemble traditional East African patterns. Products are also custom made as to the client demands.

Weaving one rug can take up to a month. Although the price varies, the starting range of the rugs is around $500.

TexFad is currently operational with 25 people on the outskirts of Kampala. It also offers internship programs to the students.

Banana textiles are not something new. They’ve been around for centuries like Nepal, the Philippines, and Japan. But TexFad is one of the first companies to bring it to Uganda. The potential here for banana textiles is huge because Uganda produces more bananas than any other East African country – about 9 million tons every year. That is about 5 tons of fruit for every person in Uganda. “I will never get worried I won’t have material tomorrow as long as we Ugandans are eating bananas daily”, said Kamani. “I can tell you banana fibre is the next fibre, and not just for fashion, for everything”, he added.