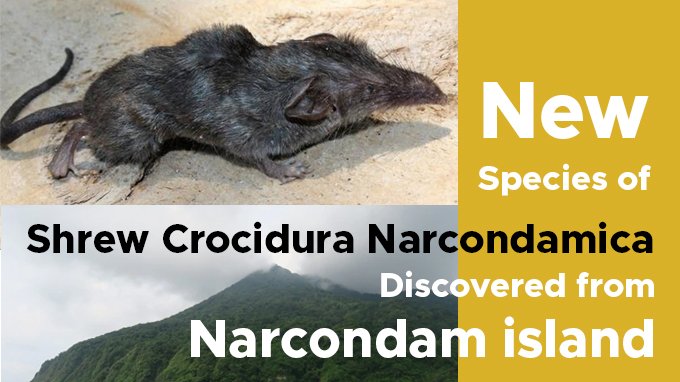 A team of scientists and researchers at the Zoological Survey of India (ZSI) explored and discovered new mammal species by using morphological and molecular approaches. This mammal is referred to as white-toothed shrews that belong to the kingdom of Animalia in the family Soricidae. Scientist-E and Officer-in-Charge Dr Chandrakasan Sivaperuman informed us that this new species is found at Narcondam island, a thickly vegetated island in the Andaman archipelago that is a sanctuary for many interesting species. With the discovery of the Narcondam Shrew species, there are 12 species of Crocidura known in India, giving a rise in the number of mammals found in India from 429 to 430.

Crocidura narcondamica species were discovered in Narcondam, a wild volcanic island in the Indian Ocean. Narcondam is a dormant volcanic island in the Andaman and Nicobar Islands, expanding around 6.8 square kilometres. Until 8 June 2005, there were some reports that the volcano was casting out ‘mud and smoke’. The island is densely forested.

And is listed as one of the World Heritage Sites by UNESCO (United Nations Educational, Scientific and Cultural Organization). They also established a lighthouse in 1983 on the slopes of Narcondam. The volcanic mountain of Narcondam island is the second tallest point in the Andaman and Nicobar Islands. The weather condition of Narcondam island is coastal, humid and tropical.

Crocidura narcondamica is of medium size and has a definite outside morphology. It was discovered in April 2020 but represented in the year 2021. It is an insectivorous warm-blooded creature and was found on a volcanic and uninhabited island. They are small and mouse-like mammals protected by grey dense fur with thick and darker tails. They survive by eating insects as their primary diet. In this manner, it is truly significant for living beings in the forest’s biological system for controlling insects. Dr Sivaperuman mentioned that the “scraniodental characters of the species, such as braincases, were rounded and elevated with weak lambdoidal ridges which make the species distinct compared to other close congeners.”

In 1978, researchers from ZSI found a critically endangered species of mammal referred to as Crocidura Jenkinsi on South Andaman Island. After 43 years, the revelation of another insectivorous mammal has been done by the team of ZSI. The primary revelation of the sort, Crocidura from India Miller (1912) depicted Crocidura andamanensis and Crocidura nicobarica, each dependent on a solitary example gathered on the South Andaman Islands and Great Nicobar Island, individually.