Fishing Cats In Panna Tiger Reserve Is A Good Sign 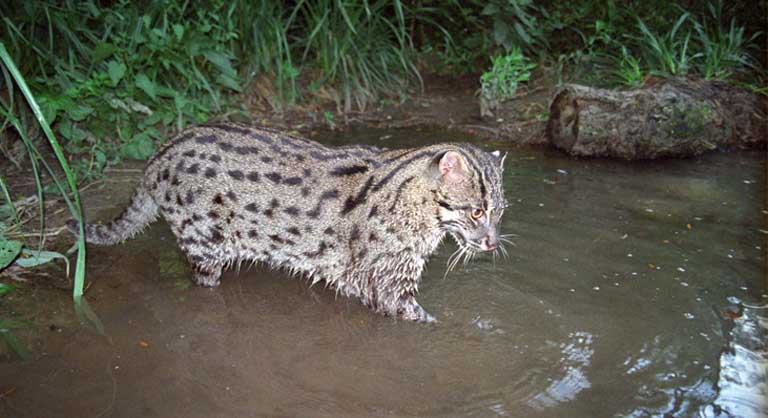 Panna Tiger Reserve in Madhya Pradesh, famous for its big cats, is celebrating because it now has photographic evidence that the elusive fishing cat is alive and well in the area near the banks of the river Ken.

Fishing cats are physically twice as large as domestic cats. The principal food of these cats is fish, hence these cats are known as fishing cats.

According to officials, the number of fishing cats is decreasing rapidly. Hunting for fishing cats has also been banned under Schedule-1 of the Indian Wildlife Protection Act 1972. They list it in the endangered category. Reserve field director Uttam Kumar Sharma said that this is definitely big news. Confirmation of the natural habitat of the fishing cat in the reserve is a big deal. After getting the evidence of its existence, now many biologists are interested in research and study on the fishing cat.

In India, they recorded the fishing cat in coastal areas. In MP, though its presence has been reported in Bandhavgarh National Park, no photographic shreds of evidence of the claim are available. We have recorded the first photographic evidence of a fishing cat in MP at Panna Tiger Reserve (PTR). PTR is in the Vindhyan hill range, under Biogeographic Province 6A Deccan Peninsula – Central Highlands. The major vegetation types are tropical dry deciduous forests, dominated by Teak and other species, including Tendu (Diospyros melanoxylon), Kardhai(Anogeissus pendula), Mohua (Madhuca Indica)and Khair(Acacia catechu).

According to the latest knowledge, India and Sri Lanka are the strongholds of the Fishing Cat (Janardhanan et al. 2014). In India, the Fishing Cat is primarily distributed along the eastern coast covering parts of Andhra Pradesh, Odisha, West Bengal and Bihar, in the northeast (Arunachal Pradesh and Assam), in the Himalayan foothills (Uttarakhand, Uttar Pradesh), and Rajasthan (Nowell and Jackson 1996; Sunquist and Sunquist 2002; Mukherjee et al. 2012Mukherjee et al., 2016Sadhu and Reddy 2013; Menon 2014). This occurrence along the West Coast and the Western Ghats was questionable (Nowell and Jackson, 1996; Sunquist and Sunquist2002) and a recent study (Janardhanan et al., 2014) found no evidence of Fishing Cat occurrence in coastal areas of Kerala.

The fishing cat (Prionailurusviverrinus) is sparsely distributed in south and southeast Asia. It is a medium-sized one of the fifteen small cats found in India. This field is typically wetland-dependent, rare, elusive and mostly nocturnal. The fishing cat is listed as Vulnerable in the IUCN Red List and listed under Appendix II of CITES due to declining population, habitat loss and fragmentation along with illegal trapping, killing and poisoning. However, the Fishing cat is legally protected in India under Schedule I of the Wildlife Protection Act 1972.