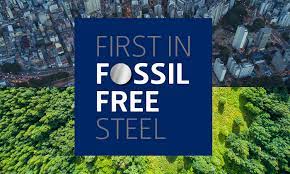 HYBRIT, A Swedish green steel venture has come out saying they have made the world’s first customer delivery of steel produced without using coal. Hydrogen Breakthrough Iron-making Technology short of this venture, HYBRIT is the process used to make the steel. This process uses 100% fossil-free hydrogen instead of coal and coke (A solid fuel made by heating coal in the absence of air).

This technology could revolutionise the industry that handles around 8% of global greenhouse gas emissions. HYBRIT started test operations at its plant for fossil-free steel in Lulea, northern Sweden, a year ago.

It aims to replace coking coal and the need for the traditional process of ore based steel making with fossil-free electricity and hydrogen. Until commercial production in 2026, it will deliver steel to the truck maker Volvo AB for a trial run.

Hydrogen plays a key role in the European Union’s plan to reach net-zero greenhouse gas emissions by 2050.  There is no proven fact disregarding the source of electricity used.  15 terawatt-hours would be needed to produce sufficient hydrogen to make the current iron and steel production fossil-free. The International Energy Agency has forecasted that the production of steel will grow by a third around mid-century. HYBRIT replaces fossil fuels in the production of iron pellets that is one of the key ingredients in creating steel and it removed oxygen from iron by replacing carbon and coke with green hydrogen. The iron is used to produce steel slabs that are ready for delivery.

HYBRIT claims that removing fossil fuels from the steel-making process could reduce Sweden’s total carbon dioxide emissions by at least 10%. Though this revolution is endearing, the time needed for transitioning from fossil fuels will be slow. This is significant in efforts to limit climate change. Replacing coking coal with hydrogen is expected to reduce emissions occurring because of steelmaking to a massive 90 per cent. Fossil-free steel is a concept with much more to explore in the coming days. Though the transition may seem slow at the beginning, change is truly eminent.