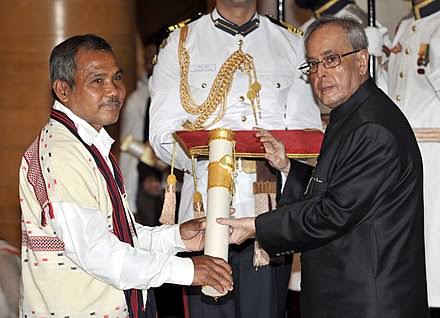 Jadav ‘Molai’ Payeng also known as Forest man of India is an environmental activist and forestry worker based in Majuli, Jorhat, Assam.

This gem of India has planted and tended several trees on the sandbar of the Brahmaputra river, turning it into a large forest reserve. He started working as one worker who was appointed under a tree plantation scheme in the Gholaghat district. He stayed and took care of the plantations and trees, even after the rest of the workers left. Slowly and gradually he started planting trees on his own and turned the barren land into a massive forest now known as Molai forest (named after him).

In 2015 he was honored with Padma Shri, the fourth highest civilian award in India. We know him for names like reforestation hero and forest man. Coming to the news of the hour, the “Forest Man of India” has been sponsored with 10 years of visa by the Mexican government. All this for him to visit the country to replenish forests and make it greener. This mission of his includes the plantation of 7 million trees under an agreement with an NGO Fundacion Azteca. He will leave for the North American country by September this year.

He will visit Mexico every year for three months for 10 years. He will work with 1 lakh student volunteers per day for this plantation drive. The joint efforts are for the development of the barren regions of Mexico that hold the potential to become forest reserves. September, October and November are the 3 months chosen as they are suitable for plantation in Mexico.

“All countries should take the initiative keeping in mind the future of the world. I have urged the brand ambassador of UNESCO that the entire world should impose a lockdown for seven days every year. If we do this, the balance of nature will return. I appeal to people across the world to step up and save our environment. We need to plant trees in each free space,” he stated in an interview with India Today. He is also planning to carry Areca nut and coconut seedling with him to Mexico.