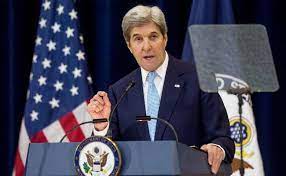 New Delhi: On Tuesday, US Special Envoy for Climate Change John Kerry and India’s Union Environment Minister Bhupender Yadav spoke on the phone about the possibility of meeting soon to move the Climate Action and Finance Mobilisation Dialogue (CAFMD) forward, taking given the unfolding Covid-19 situation.
Kerry is scheduled to meet with Yadav in New Delhi later this month or in February.

“We cannot confirm the meeting dates, because everything depends on the Covid-19 scenario.” “However, it will be organised soon,” an official from the Ministry of the Environment said.

They covered a wide range of topics during their phone chat on Tuesday, including John Kerry upcoming trip to Delhi, India’s ambitious ambitions established at the COP26 climate summit in Glasgow last year, and the potential of India and America to work together to achieve those stated goals.

“Today’s world acknowledges that lifestyle has a significant influence in climate change. In front of you all, I propose a one-word revolution. This is the term LIFE, which stands for “Lifestyle for the Environment.” Today, it is critical that we all work together to advance LIFE as a movement “‘At the Summit,’ he’d remarked.

During their conversation, Yadav and Kerry focused on CAFMD. They agreed to begin conversations as soon as workable within the framework of the climate dialogue.

CAFMD was founded in September by New Delhi and Washington as part of a co-operation aimed at attracting investment and technology in renewable energy projects. Under the India-US climate and renewable energy strategy 2030, one of the adopted tracks to finance initiatives for climate change mitigation is the climate conversation.

India will cut its overall expected carbon emissions by one billion tonnes between now and 2030, lower its carbon intensity by 45 percent by 2030 over 2005 levels, and attain net-zero emissions by 2070, according to him. Modi stated that without enough climate money from industrialised countries, these bold initiatives would be unfeasible.