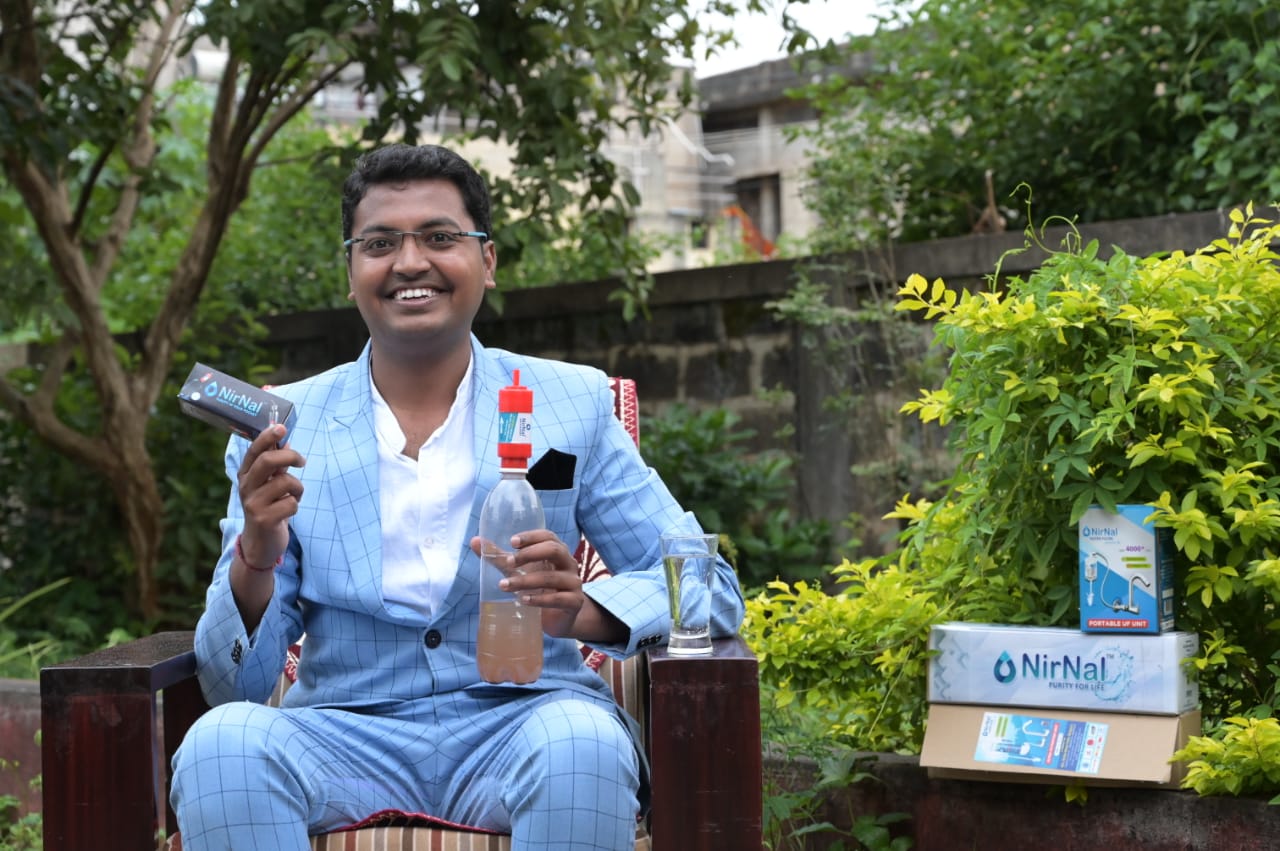 Water pollution gives us a big debate discussion to cover. Water is important for our earth and us. Sources say 125 million litres of water is getting wasted in a single day. Whereas 80% of water is polluted in India. But the question remains how people still get millions of tonnes of non-polluted water every day for their daily use. And yes, the answer comes easy: “Water Filters.”

Today because of such water purifying systems, we can drink healthy. But to purify 1 litre of water filters almost waste 2 to 3 litres of water and even electricity consumption remains a different topic to talk about. But, have you ever imagined a filter that can fit in any bottle and filters without wasting a single drop of water? And besides this, you can even carry it in your pocket.

Niranjan Karagi from Belgaum has developed possibly the world’s smallest and cheapest water filter, which he calls ‘NirNal’. It comes in for just Rs 30 which can be fitted in any PET bottle and can be carried anywhere. Niranjan has done his engineering at Angadi Institute of Technology and Management. There he made the world’s smallest and cheapest water technology to date. With the basic model, he created many other models for multipurpose.

Karagi during his engineering did several projects. He said his first project was a hydrogen kit that would extract hydrogen from water. They would use the separated compounds for different purposes. Niranjan said it was a machine that is in high demand today. For that, Karagi attended the 11th international education conference held in Thailand.

But a strong need and desire has driven young Karagi to solve the water problem. While in his 3rd year, he came with the thought of a water filter. Niranjan says there is a government school in front of his home. He and his friends used to play in that school. There he saw kids were drinking tap water. He saw the tap which was connected with the overhead tank was filled with algae and contaminated water. This scenario made young Karagi think about donating water purifiers. But they were too costly for him. Karagi says, “I come from a middle-class family. I cannot donate such costly water purifying systems”. “Then we reached and found that apart from school going children other people are also facing problems”, he adds. Many people while travelling (below the poverty line) drink water from the station. This tank would be worse than others, he explains.

He thought of why not make the cheapest and most portable water filters. At least, these filters will ensure you are consuming safe water. During his 3rd year of engineering, he launched the product. Initially, the rate was 20 which later became 30. This is a small filter that can be fitted easily in every PET bottle and then the water can be drunk directly. A single filter can purify up to 100 litres of water. They kept the idea and material used simple. It contains carbon and PP cotton whichjust releases water and almost catches up to 5 microns.

Niranjan said they have launched a recent model which comes in for Rs 300 which can be adopted for PET bottles, tap and big water jars. It comprises a microfiltration membrane that eliminates bacteria up to 99.9% and which has a self-life of 1,500 litres. The young scientist said, “Where every water filter uses electricity, our product comes with no consumption and filters without wasting a single drop of water”.

Another model comes with a straw. It can be dipped into the lake in any contaminated water body and can be drunk directly. NirNal water filters launched to date, 8 different models.

They also distributed NirNal water filters among CRPF commandos, the Indian Army, the Indian Navy and the Police Force. Karagi says, “till date over 2,00,000 units have been sold. We are also exporting to 15 different countries like Africa, Qatar, Singapore, Malaysia, etc.”

When asked Niranjan why they opted for PET bottles only. He answered, “People use many PET bottles mostly for travelling. In the market, there are filters available but it comes with their own customized bottle and even the cost is too high. And those filters only fit their bottles. I thought people have bottles all I need to give is a filter which can be adopted for all the bottles.” Karagi explains, “Being cost effective, less fortunate people can also use this product. There are products in the market which are only for either bottles either or taps. But it does not limit this to one particular purpose. He further adds that as it is tiny, it can be travelled with . So, adaptability is one of the key points.”

People should know what they are drinking. But without filters, what one should take the step for purification? When asked, Karagi said, “If they don’t have water purifiers, just boil the water, at least it can be free from bacteria and viruses. Or one can get a chlorine tablet or drops which assures a safe consumption”.

Team NirNal water filters is also working on a desalination project that converts salt water into drinking water without electricity andwithout wasting a single drop of water. “The next project will be much more effective and can be used for any kind of water”, Niranjan says as he signs off.