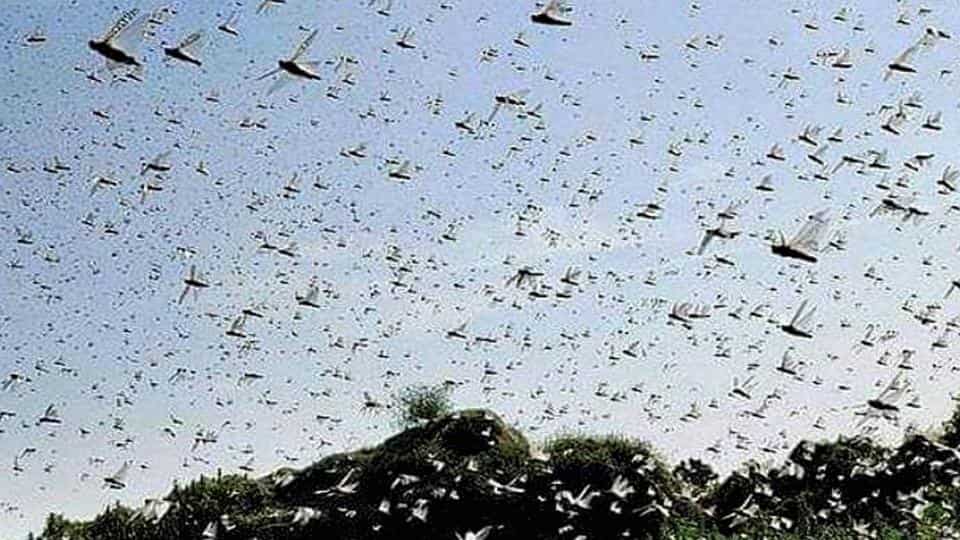 After the outbreak of pandemic COVID-19, the nation was surviving by adapting the new ways of minimalistic living. Until a new pestilence hammered Indian economy and crops in the form of large Locust Swarms. These swarms were seen in states like Punjab, Rajasthan, Maharashtra and even in some parts of Delhi-NCR as well.

In a shocking turn of events, the abrupt appearance of swarms shocked the nation. These swarms have returned after three decades with millions of locusts. We can witness them across western and northern India, destroying farms and raising alarm for the nation.

What is a Locust?

Locusts belong to the family of grasshoppers, normally living and breeding in semi-arid or complete desert regions. It is also known as ‘Schistocerca gregaria’. They migrate in vast swarms which cause huge damage to vegetation. The desert locust is supposed to be the most disastrous migratory pest in the world. They don’t victimize people or animals, but quickly eat up the seeds, leaves, fruits, flowers, and maturing notches of the plant. ‘A small swarm with 40 million locusts has an appetite which parallels to the appetite of 3500 people, 20 camels, and 6 elephants’ published by the UN Food and Agriculture Organization (FAO).

Locust outbreak is not new in India, since the beginning of the 19th century, there have been at least eight “outbreaks” causing vast damage to the nation’s agrarian lineage. According to the history of the Locust Warning Office published by the FAO, a “five-year duration” from 1926 to 1931 is said to have destroyed crops worth minimum Rs. 2 crores (about 70 crores at today’s price).

Talking to the EarthView, Dr B.B Bhosle Entomologist and former Director of extension, Vasantrao Naik Marathwada Krishi Vidyapeeth, Parbhani said, ‘For laying eggs, Locust need the bare surface, which is hardly found in regions with luxuriant vegetation. So, they can breed in African countries or the Thar desert of India but not in the Indo-Gangetic plains or river deltas.”

He further said, “However, green vegetation is mandatory for up-bringing of the hopper. Hopper is the second stage of the nymph from the eggs. Such greenery isn’t widespread in the deserts to sustain the growth of large communities of locusts. So, they migrate from one territory to another and transform in the Adult moth shaping Swarms. “

Bhosale also mentioned that as individuals locusts are not dangerous. But when they accumulate into large populations they transform from ‘solitary phase’ into ‘gregarious phase’, and begin creating swarms.

So, what made Locust so bewildering this time?

Swarms of desert locusts already attacked parts of Rajasthan, Maharashtra, Madhya Pradesh, Gujarat, Punjab, and Uttar Pradesh. Delhi, the capital was also alarmed by the wind forecast after the change in wind moments. ‘The proliferation of attacks is linked with weather dynamics of the Indian Ocean and climate change’, said Dr Bhosle.

Further, he also added that heavy rain is a catalyst of vegetation in arid regions which is suitable for the growth of desert Locust. Rising temperature because of global warming made the Indian Ocean particularly warm, which resulted in heavy pre-monsoon rains in north India and the Arabian Peninsula. Suddenly eggs came to life, and it is very much reasonable that wet soil because of extreme conditions favoured the growth of locust swarms more potentially’. After July, westward movements of the swarms because of changing winds as a result of southwest monsoon will be another challenge for states like Rajasthan. The main threat is when they start breeding. As a sole gregarious female locust can lay 60-80 eggs three times during the life cycle of 90 days.

Several Indian media portals reported that around 123,500 acres of cultivated land had already been destroyed in different parts of India.
Also, the lockdown affected farmers in tending their crops, because it left them without workers. Such, twin-menace crisis affects the food security of India.However, we have various advantages in fighting locusts because of deeper knowledge and technology. Since Farmers are aware of the arrival of swarms they have switched to crops that can be cultivated much before swarming season, and the locusts also can be curbed and killed with pesticides.

“Monitoring for locust breeding is essential, as it is much easier to demolish eggs then fully grown moth Locusts,” said Dr B.B Bholse, as a primary means to stop their attack. Presently, the methods of controlling desert locust swarms consist of using Chemicals, Pesticides, Beat steel utensils creating noise during late afternoons and evenings, and play noisy music at night to avert locust swarm,” he added.

Dr Bhosale also mentioned that accurate wind forecasting can also help in understanding the probable new landing site. He said ‘The direction of Locusts depends on wind direction, speed, and other weather conditions. If accurate wind forecasting is done, it will be helpful to understand probable new Locusts landing sites, where spraying operations for pesticide can be performed earlier, measures and instruction could be prepared in advance”

However, chemicals and pesticides can be used but are harmful to the environment and humans as they have neurotoxic effects. Therefore, broad-scale spraying of the dangerous chemical should be avoided. The practice of using must be strategic and with ultimate caution. Since it could harm non-target insects and birds such as ground beetles and Termites.
Measures such as Neem, garlic, and chillies can be used to minimize the environmental and human health costs.

The government is laying out a careful road map to deal with both the health and the economic consequences formed because of the crisis, however, the people need to understand the devastating effects of climate change. Despite the planning, it is high time to perform.