Mud House: Sustainability By Going Back To The Basics 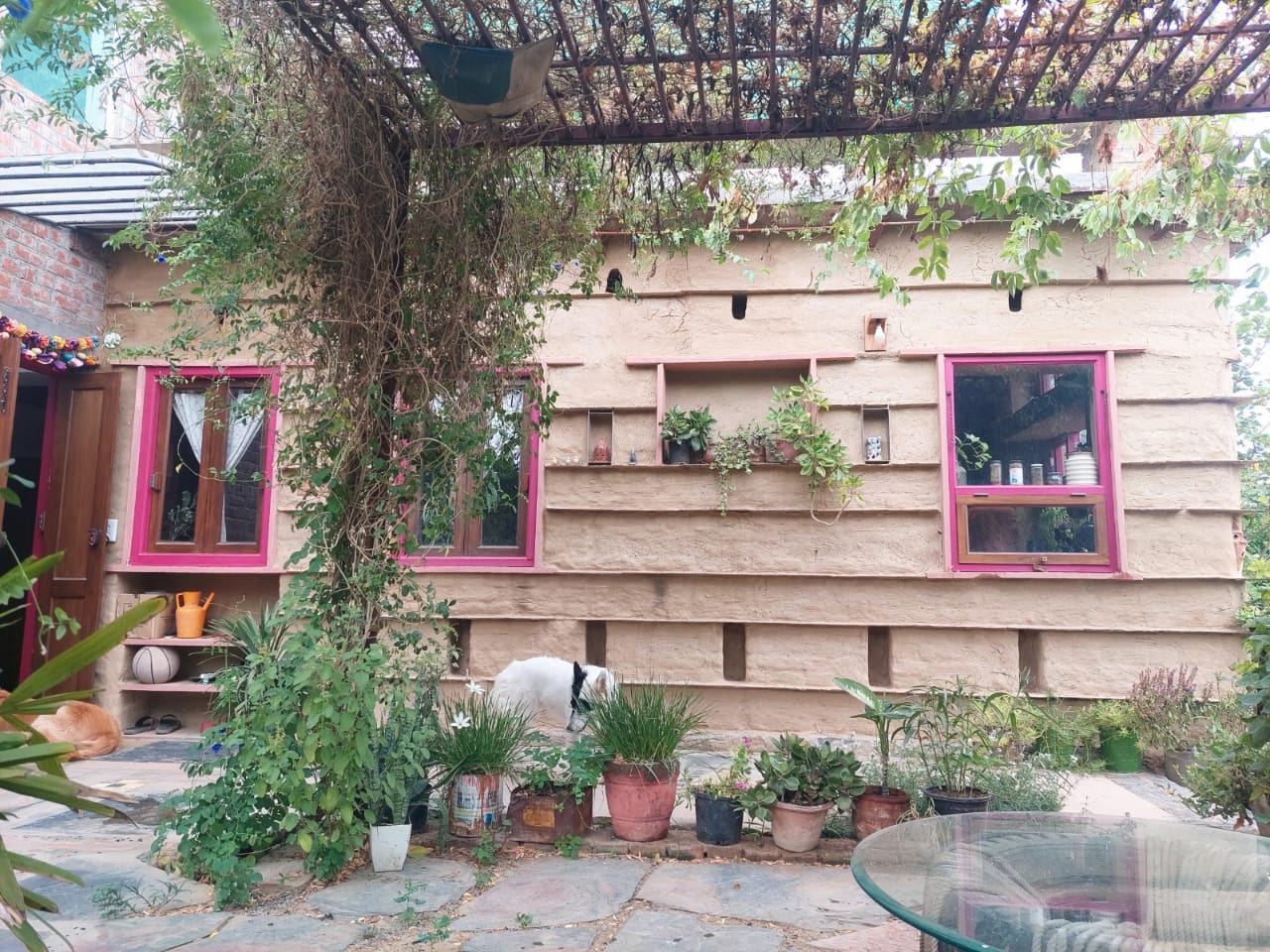 Mud house in the city? Well, mud houses have been a part of the Indian housing tradition for a long time. Being an agrarian society with most of its population living in villages, it’s the most logical way of living. This form of housing is still prevalent in some parts of India, one of the main reasons for which is because a certain proportion of the Indian population cannot afford cemented houses.

Though, with time and the global frenzy of development, which is associated with urbanisation, the concept of living sustainably had been shifted to the back burner. Now, many people have changed their lifestyle in a way to live in a sustainable and environmentally inclusive matter. One such person is Veena Lal, founder of NGO Karm Marg, who has built for herself a mud house that facilitates the environment in its growth.

To spread more awareness about sustainable living and the concept of mud houses, The Earth View spoke with Veena Lal and talked about the journey of her mud house.

“The techniques used before to build houses were in alignment with the environment. But with time, such concepts have vanished.” Veena believes that the modern houses that are built these days are not suitable for the atmosphere, since the inside is hot in summers and cold in winter. “Now, ACs and Heaters are used to adjusting the inside of the house according to the weather”.

“Around 12 years ago, we bought a place on the outskirts of Delhi to grow our vegetables. During that time, pesticides and chemicals were being used at a huge rate in the vegetables found in markets. So, we grew our own”. Veena utilised the land to not only grow the needed vegetables but also planted local plants to add on to the diversity. “We didn’t grow only a single type of vegetable, we started farming to help the biodiversity flourish. This created an entire ecosystem where local butterflies and insects had food to benefit as well. Building. a mud house was the obvious choice.”.

So, while building the house, it was very important to live as close to nature as possible and away from the city since it would have been difficult to maintain the ecosystem that she has created. “To find the most suitable type of house, I had done a lot of research. But it was becoming apparent that none of those options were for me as there was no balance of sustainability that I was looking for”.

Creating a whole alternative lifestyle away from city life is a daunting task and requires extensive research to know how to go about it. “The chief aim was to minimise water, cooking gas and electricity usage. I have researched how things need to be done. What are the basic requirements for around 5 to 6 years”. Veena wanted to ensure that during the day, there wouldn’t be any need for artificial lights. She also wanted her house to be AC free and instead to use water coolers during summers and for cooking solar power be used.

“Through the research, we concluded that mud houses were the best option for us, and we decided to give it a go”

Speaking about the things that had to be paid closer attention to, Veena spoke about the complexities that come with building mud houses. “We used a new technique of placing bricks on the walls where water is used, for instance, bathroom walls or toilet area. It’s a problem with mud houses, that wherever water is supplied or used, the house gets ruined. So, we kept that in mind”. What is fascinating about the house is that the bathroom is not attached to the rooms and is at a place which is away from the rooms but accessible from inside the house. “Another thing that we did was to not construct the attached bathrooms. As it takes a lot of space but since it is accessible from the inside of the house, it still makes up some aspects of the modern house concept”. To keep the house clean and hygienic, the house was constructed as a 2BHK. She wanted to keep the rooms small because otherwise, it would require additional protection from water. So, before moving to the house, Veena sold half of her belongings and kept only the things that were needed. This way it became easier to maintain the house effectively.

Speaking about her inspiration and her love for nature, she told The Earth View that from the start; she has enjoyed spending time in nature. “In cities, greenery is hard to find and some places where there are trees, they are mostly for beautification rather than helping the environment flourish”. This is where Veena Lal’s inspiration comes from, where she wanted to build a house that would be homely and not for decorations. “I didn’t want to build a house which is arranged in such a way that a person does not feel at home and everything is just for decoration. This is also one reason we built a small house but ensured that there is a big and open area for as many birds or living organisms to live there. To provide space for birds to build their nests, we have hollowed some sections of the house so that birds can live there”.

Finding people to work on a project with such different values is difficult. As the conversation continued, Veena spoke about the reaction she received from others and the experience she had working with architects. “Initially, people were not encouraging at all and were sceptical about how everything will take place and how difficult it will be”.  The land on which Veena had built the house had insect and termite problems and she wanted to build the house at a low budget (I wanted to keep it as low as 8 to 9 Lakhs and a maximum of 15 Lakhs). “Every architect that we talked to was asking for higher prices which would have been out of our set budget”. After a long time, Veena collaborated with architect Amol Mankeekar to plan out a perfect mud house that was sustainable and durable for a longer duration. “Amol is a young and very creative person with great ideas. Since he had worked in Himachal, he knows what works in different terrains”.

To utilise space properly, the roof of the house was converted into a terrace. “Earlier, it was common for people to sleep on their terrace during the summers and spend time there when the weather is nice and in winters enjoy the warm sun”. For this, the tilted roofs are removed, which protected the house from water and rainfall. “To protect the walls, Amol came up with amazing ideas and helped us”. While helping Veena in her endeavour, Amol himself explored new and eco-friendly ways of building sustainable houses and their mechanisms. “Throughout the project, we got along well. He completed the work under the fixed budget and now when I think about it, I don’t know how this would have been possible without his help”.

After living in the house for around 10 months and making people aware of sustainable living for so long, Veena received positive reactions from people. “People like the concept of mud houses now. Some have even reached out to me and have asked about the entire process so that they can build one for themselves.” It’s different to think of living in a mud house and living in it and understand how practical the lifestyle will be. While talking about the practical aspects, Veena emphasised that “it’s very practical and easy to implement. I can’t imagine myself living in cemented houses anymore. I believe that if a person is ready to adapt, change their mindset and lifestyle, it’s not at all difficult”. Veena said that maintaining the house requires a lot less hassle and is easy to maintain without worrying about whitewashing the walls and such things. “Is whitewashing not needed anymore, but this way, a lot of the chemical that is used in the process will not be used and it will help in lowering the budget”.

The main reason for opting for a mud house was to reduce the use of electricity and water and their wastage as much as possible. Sustainable housing is one of the best ways to prevent excessive use and wastage. “Where we live, there is no water supply, so we extract water from the bore well that we have installed, which functions on solar energy. In a month, three people only use around 4000 – 4500 litres of water for three people.  As a conscious person, Veena had decided not to install dishwashers and such electronics. Not only this, she doesn’t use any type of commercial detergent either. For washing clothes and dishes, a mix of natural ingredients such as reetha is used. “The water which comes out of the house, from the bathroom, washing clothes, kitchen, all of it is channelled into the open garden. Since Veena has opted for dry-toilets, water is not used, creating a system through which trees are watered”.

Gas and electricity are also used judiciously since they use solar power for most of the things, cooking as well. “Our monthly electricity bill is around Rs. 600 and one cylinder of cooking gas is used for around 2 to 3 months”.

We can say that somewhere we expect that mud houses would be difficult to keep sturdy, especially if their vulnerability is considered towards the water but during the conversation, if planned properly there are few challenges that one would face in the eco-friendly mud-houses. “We didn’t face many enormous challenges though there were some minor ones, like at one or two places it required a little touch, but other than that, the house has been problem-free. In fact, during winter the house stayed warm”. Veena spoke about how during summers when the humidity is high one may feel warm, but they designed the ventilation in such a way that the water cooler is more than enough.

Veena Lal is not only a nature lover but also a founder of Karm Marg, an NGO, which is based on the concept of community living, where children of varied age groups with nowhere to go live. The NGO started back in 1997 and has helped every child and young adult to live upon dignity, self-esteem, become self-reliant and grow as an aware human being. “We can house 50 children/youth at a time.”

Young adults in providing skill enhancement training to make themselves self-sufficient for the long run under Jugaad Trust’s primary focus of the programme is to make them independent so that they can take control of their life and can succeed. Under the project, we will make paper bags out of donated newspapers to replace plastic and make designer cloth bags and accessories using waste and leftover fabric. For this, we employ women from nearby villages and the youth of our Karm Marg, where they take up managerial or other tasks. Since the organisation has existed for so long that many generations have formed, the kids have grown up and they take care of each other”.

As the conversation concluded, Veena Lal wanted to convey the message that “there is a need to be more sensitive and sympathetic towards every living being on earth and make them a part of our life. Do we need to ask ourselves where are we going as a society? We have this one planet to call our home so we need to protect it and change our lifestyle and be conscious about our needs”.