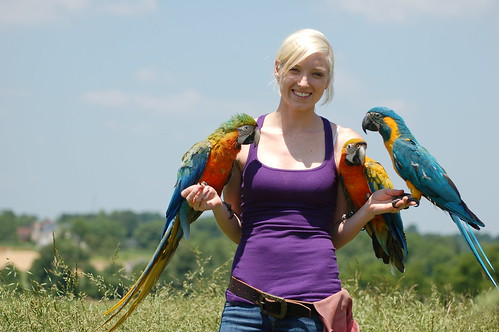 Texas A&M University and Viro have come up with a unique way to parrot conservation. Researchers at the University of Texas A & M are applying the training techniques which were practised by parrot owners for decades to launch new wild bird flocks. A lot of bird owners cut off the wings of their birds to moderate their ability to fly. They trained the birds in free flight and followed the basic orders of their owner, parrot identifies threats of nature and if there are no such things happening parrots would fly through open areas.

A doctoral graduate student at the Texas A & M College of Veterinary and Biomedical Sciences (CVMBS) and Donald Bright smith an associated professor at CVMBS, and Chris Biro is a renowned free flight trainer for project results, published in the recent thesis Diversity Constance Woodman. In this documentation step-by-step training process of Viro is included so that conservationists could apply his procedures when releasing birds to the wild.

Biro, the most experienced free flight trainer, has trained over 400 students from over 30 countries. Bright smith said that “The Colleagues of Americas who raised and released birds, their primary purpose is to protect but they do not write a lot of science”. In this project A & M have the role to put this information in the right place and in the right format so that people around the world can read, criticise, use and improve it. This information will not become scientific and in case of literature it will not develop the future of a science of protection of Macau and Aum but it will only help one or two groups.

The free flight is a unique exotic bird sanctuary in Del Mar, California. The mission of this sanctuary is to maintain shelters, nurture and re-socialise parrots and educate the public for the well-being of exotic birds.

Macaws and conures respond eagerly to flight training along with positive strengthening methods, including from beginner level trainers. Large birds seem to perform better compared to predators when flown solo. Colourful birds are easier to spot in trees.

After 500 months of free flight, 37 birds were hand-raised and formed a strong bond with their trainers. Birds have learned to identify, avoid, intimidate predators, search for food and identify safe and unsafe options.

During the training, Biro’s method proved successful because the trainer did not lose any bird to a predator or leave the bird outside the training area. Texas A & M and Viro will be the first non-profit organisation to test free flight as a security tool over a joint project in Brazil and Honduras.

Using the “kernel” Flock conservationists could be able to release wild birds without the need to train themselves.

“To free-fly a parrot safely, get involved in free-flight community because there will always be a risk of losing the bird and the risk can also increase with no proper training,” said Woodman.