Plastic Eating Mushrooms – A Natural Solution To The Problem Of Plastic. 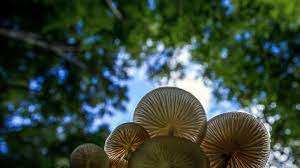 Scientists have discovered a few mushrooms that eat plastic over the years. Yes, you read it right, a plastic-eating mushroom. Does this mean a natural solution to the problem of plastic pollution?

Plastic is a synthetic organic polymer made from petroleum properties, which makes it ideal to be applied for a variety of purposes, such as packaging, construction, household equipment, vehicles, electronics. Their lightweight and durable properties, along with being economically cheap, become the reason over 300 million tons of plastic is produced every year. A vast amount of this plastic is produced for single use and gets discarded by consumers every day. Like every other garbage, this plastic reaches either the landfills and gets illegally thrown or through sewage reaches the water bodies.

Many studies and experiments have found that plastic either in its intact form or as microplastic has reached almost every corner of the earth, be it the deepest part of the ocean or at the microscopic level. This has resulted in animals and birds swallowing plastics, mistaking them as their food. Because of this, the animals and birds starve to death even though their stomachs are full.

Plastic has come to a point where microplastics can be found in food that humans consume, such as rice, fish, water.

It is of utmost importance that the production and consumption of plastics should gradually stop and the transition can be made by only utilising reusable plastic material and disposable materials.

To such a big problem, a simple solution seems like an impossible thing, but the truth is there are many ways we can deal with plastic.

In 2011, a group of students at Yale University on their expedition trip in Ecuador discovered a species of fungus which could consume polyurethane, the key ingredient in plastic products, and convert it to organic matter. They identified the fungus or mushroom as Pestalotiopsis microspora.  Further, it was discovered that Pestalotiopsis microspora can live without oxygen, which suggests enormous potential for feeding on and thus cleaning up landfills. In an experiment measuring the rate at which the fungus decomposes matter, they noticed significant clearance in the plastic material after just two weeks.

Later, in collaboration with Katharina Unger of LIVIN Studio, and the microbiology faculty at Utrecht University in the Netherlands ran a project using the mycelium (the vegetative part of the mushroom similar to a plant’s root system) of two common mushrooms, Pleurotus ostreatus and Schizophyllum commune, where they could turn plastic into human-grade food in 2014. As the fungus digests the plastic, it grows to create a mycelium-rich snack after just a few months. While the design on which the mushrooms were cultivated on circular pods made of seaweed-derived gelatine filled with UV-treated plastics, known as Fungi Mutarium, was just a conceptual prototype to support research, it presented the potential of commonly eaten mushrooms as a solution to plastic pollution.

In 2017, a team of scientists made another discovery at a disposal site in Pakistan where they found a mushroom that eats plastic is a general city waste disposal site. The fungus, called Aspergillus tubingensis, could break down polyester polyurethane into smaller pieces after two months.

With such types of discoveries, we can handle the problem of plastic disposal environmentally sustainably fungus can sustain in waste treatment centres and can be managed at composing places at home and any other place where the conditions are not favourable conditions.

If utilised in a controlled environment and at a smaller scale first, mushrooms can aid plastic to a certain extent since the scientific studies so far have shown the effectiveness of fungus.

If more research is performed regarding safety and other aspects, mushroom cultivation might address two of the world’s greatest problems: plastic and, to a certain level, food scarcity.