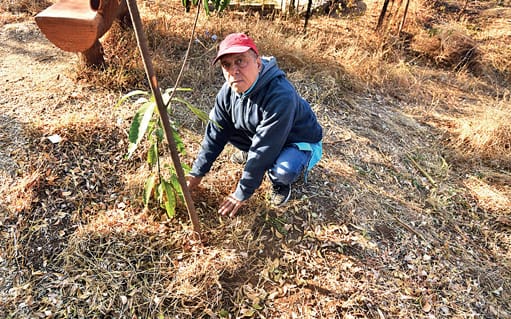 Praveen Kumar Anand, a 64- year old man along with the support of citizens, helped in revitalising the green cover of Pune city. In last seven years, with continuous dedication and focus to contribute for the environment, Kumar has converted 64- acre of the barren hill into rich bio-diversity, known as Anandvan, in Kondhwa Pune.

The project ‘Anandvan’ began in July 2013 after Praveen Kumar returned from Dehradun. On one of his morning walk, Kumar stumbled upon a huge unkept 64-acre hill. Everywhere what he could see was garbage and barren land. “My family and I started taking out tonnes and tonnes of garbage dumped all over the forest, plastic waste flying with the wind, construction material, furniture waste, barber waste, toxic medical waste and fresh toilet of almost 20-100 people daily,” said the man who is popularly known as Kumar uncle.

In the beginning, Praveen Kumar was confronted by many other people from neighbouring societies and also slum dwellers who threatened him and advised him against the idea of working for nature. However, he stayed committed to his motive of contributing to nature.

Apart from cleaning, the main idea behind Anandvan was to develop rich biodiversity, though it was not free from challenges. Kumar said, “There were two challenges in front of us, firstly, water was scarce and the other it was barren land. With very few trees and barren land, the animals and birds were rarely seen. Therefore, we decided to improve the species vegetation. The water scarcity was solved with the growing awareness of the project. We demanded people to provide us with only water and no other funds. We worked with small cans to big tankers which was sent by the people who were interested to help us and it was a big help in sustaining the project.”

He further said, “The newly planted saplings would wilt and die or take longer time than usual to grow. To solve this problem, we reached an ecologist. He suggested that as the majority of the primary vegetation found on the hill belongs to an invasive species Gliricidia Sepium, which caused the soil to remain infertile and barren. To make the land fertile for plants, we used kitchen biodegradable waste, dry grass into pits to provide more nutrition. Soon this method resulted with green desert on the hill and chirping of the birds.”

In 2013, which was barren land, with the firm dedication of Praveen Kumar and the members of his team, ‘Anandvan’ is home to 33 thousand big trees and small plants with rich bio-diversity of birds. It is one of the most visited spots by the visitors of the area who want to enjoy nature in its most raw and real form.

Yes, You Can Help The Environment By Renting Out Clothes