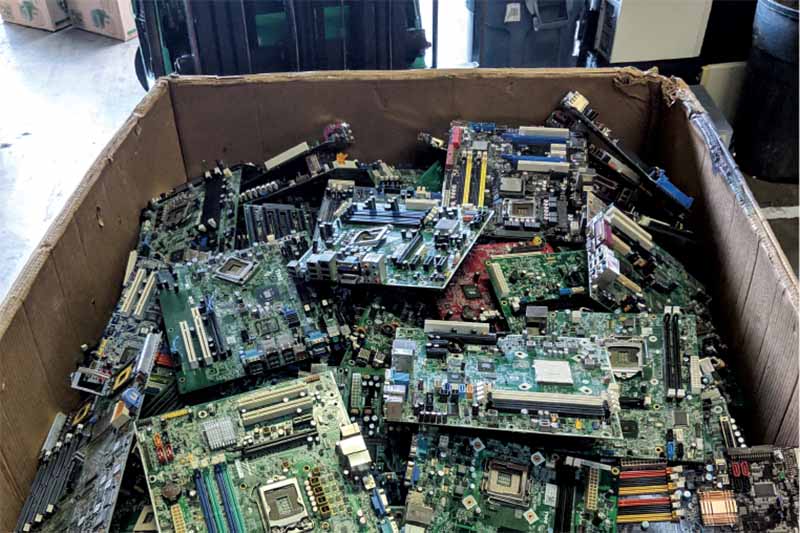 Electronic waste, or e-waste, is the term used to describe discarded electronic devices and products that are unwanted, not working, or are at the end of their ‘useful life. Laptops, computers, tablets, mobile phones, TV appliances all come under the umbrella of e-waste. But the thing is, only 17% of the e-waste generated is recycled because they are not made to get recycled.

These discarded electronics contain hundreds of materials, from toxic materials to plastic, to gold that is hard and hence expensive to break down, since they each need to be separated and recycled individually, and require lots of people, space, and heavy-duty machines.

But Sims Lifecycle Services, one of the largest e-recyclers in the US, has its own way of recycling and repurposing about 6 million pounds of old, discarded electronics every single month.

The company’s biggest facility, of about 200,000 square feet, is in La verge Tennesse, just outside Nashville. The major source of discarded electronics at Sims is office gear like computers, printers, and laptops. According to Ingrid, global president at Sims Lifecycle Services, if it can’t be reused, it, very last, goes for recycling.

The first stop for any bundle of waste coming in is the scale, where they take weights and put them in their data. Here, the waste gets tagged with a bar code that tells them if it will go for destroy-recycle or reuse. The right part of the facility is for recycling and the left one is for reuse. If the parts can be reused, there’s no need of making a new one. Like, sometimes you can’t sell the whole laptop, so they remove the reusable parts and either rebuild a new laptop using the removed parts or just sell them.

It is a lot of skill to remove all those tiny valuable parts out of the device without causing them harm, and most of the job is done manually, using a lot of different screws, and hence, is very labour intensive. Screens, processors, keyboards, memory units, and motherboards are all reusable. Workers at the facility clean them, check their functionality, and send them back to the inventory where they can be sold again.

Big hard drives from servers and computers come with the added challenge of security, and any previously stored data needs to be removed before the drive goes further for resell. “We have a lot of banks and insurance companies as our clients. So you can well imagine that those folks want their data erased properly”, says Ingrid.

Things that can’t get refurbished go from recycling to the destroy-recycle part of the facility. Here, they start with removing hazards, batteries, and many other things before they go for shredding. Hazardous materials in electronics like cadmium, mercury, and lead cannot end up in landfills, or else they’ll cause major damage to the groundwater and soil. And everything that’s not hazardous gets shredded.

A giant magnet over the head of the shredder pulls out all the steel and leftover materials head over to another machine, which separates everything else using infrared technology. Whatever is left, go into the Dutch sink-float machine, in which plastic floats and everything else sinks to the bottom, and they scoop out the plastic from the top.

Electronic devices have precious metals like gold, copper, palladium, and platinum in them, which can be separated and sold for reuse piecemeal. And with over 75% of e-waste going to landfills, companies are missing big profits. In 2019 alone, about $57 billion worth of precious metals and valuable materials were thrown away and even burned.  If we ding into this recycling thing for e-wastes too, the outcome can be quite profitable for both companies and our environment.