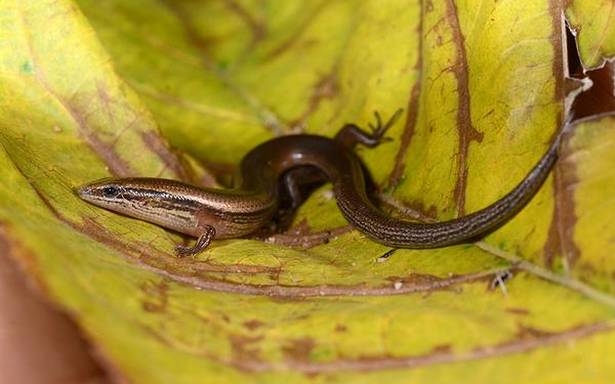 When Achyuthan Srikanthan, a member of the Indian Institute of Science, Bengaluru, went to attend the South Asian Reptile Red List Assessment organised by the International Union for Conservation of Nature (IUCN) in September 2019 in Coimbatore with a group of herpetologists, he didn’t realise he would discover a new species while going on a spontaneous night visit to a private farm. We know this new species as an Asian Gracile skink.

They gave its scientific name as Subdoluseps nilgiriensis after the Nilgiris. Its physical features include having a slender body (about 7 cm) and being sandy brown. The team writes that it’s closely connected to Subdoluseps Phuthi, a species found in parts of the Eastern Ghats. A paper published in Zootaxa by Aniruddha Datta Roy mentions that it’s important to change the impression that high biodiversity can only be found in wet and evergreen forests because the new species was found in a dry deciduous area which showed that even the dry zones of our country are habitat to unrealised skink diversity which needs to be explored.

Prof. Roy from the National Institute of Science Education and Research (NISER), Bhubaneswar, added that most of the research in Tamil Nadu is focused on megafauna such as tigers, elephants found in protected areas. We should also give importance to the little-known groups because they are essential components of our biodiversity. He also mentioned that because of the species’ elusiveness, there is not much knowledge about their natural and evolutionary history. These species are diurnal and are secretive in their habitats and are put into the data deficient category. In the last millennium, this is the third skink species they have discovered, and it makes them realise how they underestimated their reptile species diversity. Other characteristics of the species are that they are non-venomous, harmless but they are mistaken and killed as their inconspicuous limbs and the way they move on land resembles snakes.

Avrajjal Ghosh, one author of the paper, also informed us they are yet to study the breeding and feeding habits of the species but assume that they eat like the other skinks who eat on insects such as crickets, termites and small spiders. Rapid urbanisation, which has increased road networks in the area, seasonal forest fires, housing construction and brick kiln industries are potential threats to these vulnerable species.