Smog haunting the heart of the Nation-Delhi 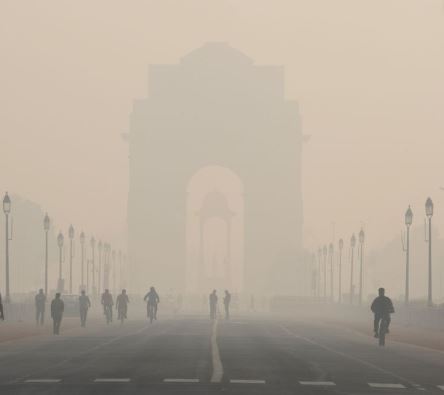 Delhi Pollution are trending on twitter for many days and jokes about the condition of Delhi air quality becoming viral on different platform of social media. Delhi has once again become everyone hot favourite topic. Not for the first time, but the problem of poor air quality has been a constant phenomenon for the city every time the  winter sets in. However, the consequences of this on human health are not at all funny but extremely serious.

Several reasons contribute to the poor air quality index in the heart of the nation-Delhi. One of the major reasons is the crop burning by the farmers in the state of Haryana, Uttar Pradesh and Punjab that shares borders with the national capital. Burning of  rice stubbles in these states is very rampant especially in the month of October. The wind carries all the pollutants and dust particles which get locked in the air due to stagnant wind as the winter sets in. Another reason for the increasing reason for air pollution or smog is the vehicular emission that attributed to increasing air pollution while the increasing population only adds up to various types of pollution. The extensive construction in the areas of Delhi-NCR also resulted in increasing the levels of air pollution. As the winter set in, the dust particles and pollutants in the air are unable to move and get locked in the air that results in smog.

Industrial pollution and garbage menace continue to contribute to making the air quality poorer. This air pollution has serious implication human’s health as recently Indian Medical Association also declared a “public health emergency” in Delhi due to the alarming pollution levels. Experts also suggested people stay indoors and avoid outdoor physical activities. This kind of air pollution poses major health risk across all age groups. It can cause serious diseases such as lung cancer, heart problems, epilepsy and acute respiratory diseases. It can also lead to the onset of  various allergies  and decrease lung immunity

However, it is extremely disturbing to see that we are moving towards space where we cannot even breathe and more than that it is devastating that what legacy we are leaving for our future generation, not even a single ounce of pure air and myriads of illnesses. Its too late to say that its time to think and act but we have reached a stage where all we can do is repent!!

It is important to secure the air quality index in other metropoliton cities of our country such as Chennai, Mumbai, Ahemdabad, Bangalore and others. Its time to act and preserve the environment, increase the green blanket and improve the public transport to reduce the vehicular emmision that are serious threat to environment. Its time to act before you regret!!

Nisha Pathak, A 17-Year-Old Girl, Made A Step Towards Innovation.

World Snake Day To Spread Awareness About These Reptiles