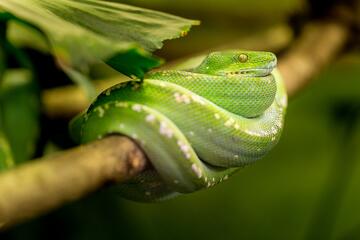 According to a report, which was published in Nature Communications, it says that we all trace the species of snake’s back, which was surviving at the time of the dino-killing asteroid. Modern snake diversity has only emerged after the mass extinction, such as tree snakes, sea snakes, venomous vipers, cobras and huge constrictors like boas and pythons.

An asteroid hit Earth 66 million years ago, causing earthquakes, tsunamis and wildfires, followed by a decade of darkness when ash clouds blocked out the sun and the dinosaurs died eminently.

Around 76% of the flora and animals have vanished. Snakes, birds, frogs, and fish are clinging to life. “Snakes can survive and thrive in the collapsed environment of the food chain, as well as colonise new continents and interact with the environment in novel ways,” says Dr Catherine Klein. It’s as if dinosaurs would not be where they are today if not for the asteroid hit.

When the asteroid smashed into Mexico, we were only familiar with snakes with legless and stretchy jaws for swallowing prey. Snakes can survive in a short supply of food or without food for over a year and to hunt in the gloom following the devastation was likely influential in their existence.

The group of snake species that conquered were those who lived underground or in the forest or freshwater. With little competition with other animals, snakes had a blank canvas to branch out beside different evolutionary lanes and through the world, inhabiting Asia for the first time.

Over time, snakes became bigger and more prevalent, exploiting new habitats and new quarries. Many unknown groups appeared comprising a giant sea snake which is 10 meters long. Snakes play an important role in maintaining the ecosystem. These reptiles can keep pests like rats and mice in check. Snakes are also useful to control the population of rats.

Titanoboa is the snake that existed at the time of dinosaurs, which was considered the largest member of Serpentes. Titanoboa is also known for its fossils.