The Man Who Planted Over 20 Million Trees, Peepal Baba 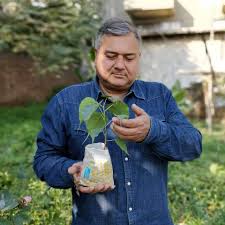 Peepal Baba has been planting trees in India for over 40 years and has planted over 20 million trees. What began as a hobby for an 11-year-old boy and his buddies at Pune recreational club in 1977 has strengthened into an environmental organisation dedicated to tree planting and conservation across India. The group is now, three decades later, one of India’s largest community-based voluntary tree-planting efforts, with over 10,000 volunteers. This movement is now known as the “give me trees” club.

Swami Parivartan, an 11-year-old kid, began this long-lasting passion in 1977. Under his philosophy of “more trees, a better world,” an estimated 20 million trees and over 1.2 crore peepal and neem trees have been planted.

The sacred peepal tree is protected from being cut down because of its religious significance, superstition, and mythological references. One of the main reasons Swami Parivartan began planting peepal trees all over India is because of this.

The goal of Give Me Trees is to increase the amount of natural air conditioning on the earth by planting more trees. Due to the fact that we are on the verge of extinction, Swami Prem Parivartan, also known as the Peepal Baba, has emphasised the importance of the tree plantation programme, stating that if we do not obtain our trees, our earth as we know it will perish.

Every day, more people are becoming aware of the issue, and action must accompany this awareness.

Over the last few years, Give Me Trees Trust has produced over 270 tree clusters and worked on 54 CSR initiatives aiming to create forests in India, known as the ‘Pedo Ka Ashram’ monastery. In Delhi-NCR alone were planted more than six lakh trees, 4.7 of which survived lakh trees. There are also 400 kindergartens around India, three of them in Delhi, with a capacity of 1 lakh of saplings.

Give Me Trees is also raising awareness and training citizens and communities on how to properly plant and conserve trees, and the volunteers and teams working in that region are evaluating survival data.