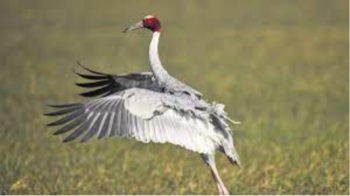 The Sarus Crane is a large non-migratory bird found in parts of the Indian subcontinent, Southeast Asia and Australia. These majestic bird species’ populations were on a rapid decline since the beginning of this century.

The major threat to these mighty birds in India is habitat loss and degradation because of draining wetlands and conversion of land for agriculture. It also recorded the deaths of the Sarus due to the rapid urbanisation of its local habitats. This has been one of the major concerns for environmentalists.

Weighing at an average of 6 kilograms at the height of 152 cm, these birds are one of the tallest flying birds in the world. Their population has caused rising concerns among conversationalists, leading to large-scale awareness drives such as the Sarus Crane conservation project or the Sarus Mitra (friends of Sarus).

Uttar Pradesh is a stronghold for these beauties. The Sarus Crane conservation project ran across 10 districts of the state by the Wildlife Trust of India. With local volunteers engaged, this project is also known as Sarus Mitra or the friends of Sarus. Under this initiative, locals were enlightened about the sarus species and were also taught about how they could co-exist with birds. The human-wildlife conflict that had occurred before the conservation initiatives also caused the population to decline. Moreover, the chemical pesticides that were being used also harmed the birds. The chemical pesticides used on the field washed off into the local lakes and pollute the water, contaminating them for the Sarus.

Because of the decades, long efforts, the Cranes have identified local wetlands as a haven for breeding and nesting. This has thus resulted in breeding all year round.

It has revived the Crane population that was reduced to a mere few hundred with the help of residents and environmentalists. After a decade long battle of keeping this majestic endangered species, the numbers have finally risen to the thousands counting to a whopping 13000, 73% of which have been concentrated in the western districts of Manipur, Etawah, Etah and Aligarh. Efforts to revive the mighty Sarus cranes to their former glory rage on.