The women of Paalaguttapalle have a solution to the plastic problem. 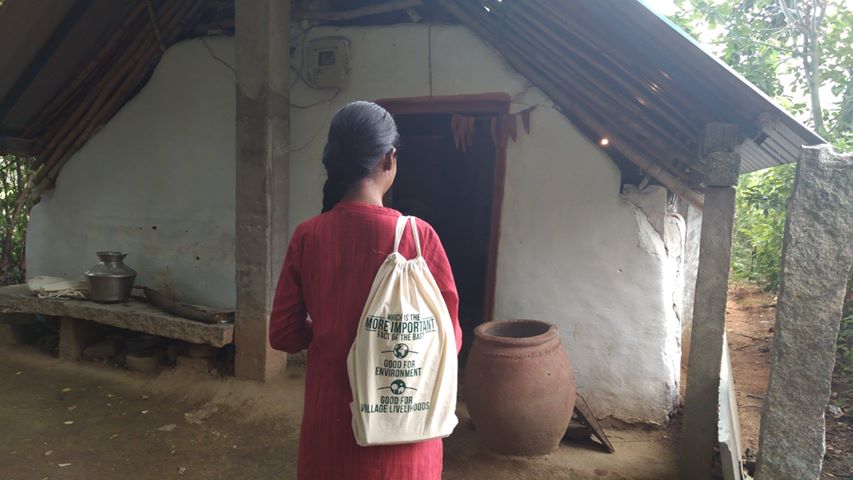 After experiencing a series of droughts, the women of the village began stitching eco-friendly bags to make a living.

E.Paalaguttapalle is a village few people had heard of until recently. Between 2010 and 2015, the village experienced a severe drought. Many decided to migrate to neighbouring villages in search of a livelihood.To find a solution to this crisis, a few women from the village came together to start tailoring as they were familiar with this occupation. Today, Paalaguttapalle bags have found customers across India and in countries abroad as well.

Aparna Krishnan, who moved to the village in 1995 to become an organic farmer, helped them with their first order. Speaking to The Earth View, she said, “We started very small with four women initially. No NGO or state program prompted them. The idea was their own. Soon after that, more orders began coming in.”

She further said, “The quality of the bags has been very consistent, which is why demand has grown over the years. I’m not saying we are deluged with orders, but at the same time there has been continuous work “The range of bags offered includes backpacks, laptop bags, tote bags, jewellery pouches, among others. The women also learnt to make canvas bags during the pandemic which they distributed among school children to create awareness about the dangers of non-biodegradables.”

In villages across India, the use of Rexine bags among schoolchildren has increased dramatically”Rexine is a non-biodegradable material. Unless disposed of in a recyclable process, it will not degrade naturally and will remain in the garbage for a long time. “By distributing bags in schools, we are hoping to bring back the culture of canvas bags and create some kind of an impact in countering the plastic problem.”

Speaking about ways to prevent the spread of plastics, she said, “The problem has to be addressed at a policy level. Every shop is selling goods which are pre-packaged in plastic. Whenever there is a plastic ban, production of cloth bags should be handed over to rural groups. This would ensure that concerns about livelihoods as well as the environment are taken care of “In India, many villages like Paalaguttapalle are dependent on agriculture. Due to climate change, agriculture and, along with it, the livelihoods of rural people are often brought to a standstill.The replication of similar business models is possible in villages across India. However, it may not be an easy task, due to various factors. One of which is marketing. Aparna said, “Marketing the products is a huge challenge as there is a surfeit of bags made out of waste cloth, produced by industrial units that sell much cheaper than ours. When it comes to replication, there needs to be government intervention which would ensure that such products have a market “

In addition to bags, the women also sell masks, scrunchies, headbands, cushion covers and pickles, made from traditional recipes. She said, “Most of our products are made from unbleached cotton, which is as low a carbon footprint as one can get. Local pickles are made without using preservatives. We will soon be selling soaps made out of local oils “

The women of Paalaguttapalle have, despite the odds, succeeded in creating an enterprise that is not only sustainable for the environment but also supports livelihoods. Aparna said, “We aim to get people to think that a better way of living is possible with far less consumption and far greater happiness. This is often a challenge because voices like ours are often drowned out by those advocating for consumerism. ” She further added that a handmade product ought to be costly because it helps support lives, and it is our responsibility to opt for them over industry-made goods.