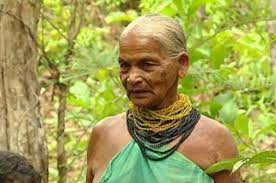 Padma Shri Tulasi Gowda, the barefoot environmentalist known as ‘Encyclopedia of Forest’. Tulasi Gowda, a 72-year-old tribal woman from Karnataka, was conferred the Padma Shri award on Monday for her contribution to the protection of the environment.

Tulasi Gowda, a 72-year-old barefoot environmentalist from Karnataka who is also known as the “Encyclopedia of Forest” was honored with the Padma Shri award this year for her contribution towards the protection of the environment.  She received India’s fourth-highest civilian award from President Ram Nath Kovind during a ceremony in New Delhi.

Tulasi Gowda’s first name is directly associated with nature and is derived from the Kannada word Tulsi which means Holy Basil, a sacred plant within the Hindu religion. Belonging to the Halakki indigenous tribe in Karnataka, Tulasi Gowda rose in a poor and disadvantaged family. Despite having no formal education, she has made immense contributions towards preserving the environment. Since the age of 12, she has planted and nurtured thousands of trees. Tulasi Gowda also joined the forest department as a temporary volunteer, where she was renowned for her devotion to nature preservation. She was later offered a permanent job in the department. During her entire time at this nursery, she contributed and worked directly to assist the afforestation efforts by the forest department by using her traditional knowledge of the land that she gained through first-hand experience.

Tulasi Gowda is known by environmentalists as the “encyclopedia of the forest” and by her tribe as the “tree goddess” because of her widespread awareness surrounding the forest and all of the plants that grow within it. She is well-known for her ability to identify the mother tree of every species of tree in the forest no matter its location. Mother trees are significant because of their age and size which make them the most connected nodes in the forest. These underground nodes are used to connect mother trees with saplings and seedlings as the mother tree exchanges nitrogen and nutrients. Tulasi Gowda is also a master of seed collection. Seed collecting is the extraction of seeds from mother trees to regenerate and regrow entire plant species. It is a very difficult process as the seeds must be collected at the peak of germination from the mother tree to ensure the survival of the seedlings, and Gowda can decode exactly when this time is. This extraction of seeds is particularly useful within the Karnataka Forestry Department as they describe their 4 main goals as “regulatory, protection, conservation, and sustainable management.

Tulasi Gowda has been an inspiration for every individual to protect the environment. Spreading awareness about the preservation of trees is the need of the hour where climate change and its preservation have been the hot topic.