World Nature Conservation Day: On The Verge Of Extinction 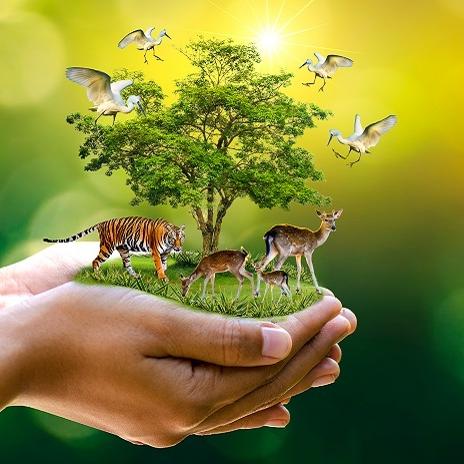 Due to human neglect and inconsideration towards the environment, it forced numerous animals and plants towards endangerment. There are now 41,415 species on the International Union for the Conservation of Nature (IUCN) Red List, and 16,306 of them are endangered species on the verge of extinction. This includes both endangered animals and endangered plants.

July 28th is celebrated as World Nature Conservation Day to remind us how important it is to conserve and protect the planet we live on. On this day, awareness is raised about the environment and its healthy condition for our society to prosper.

Earth’s natural resources include air, minerals, plants, soil, water, and wildlife. Conservation is the care and protection of these resources so that they can be preserved for future generations. This includes maintaining the diversity of species, genes, ecosystems, and functions of the environment, such as nutrient cycling.

The practice of disturbing nature to develop is a harmful practice, not only for nature but for ourselves as well. The increase in global temperature is causing an imbalance between nature and humans, which gives rise to various diseases and leads to disasters like floods. Climate change, pollution, environmental degradation, and global warming are all on the rise because of our disregard for the environment in pursuing advancement.

Here is a list of some of the endangered animal species:

Javan rhinos were killed by trophy hunters during colonial times. They were also killed as agricultural pests and for their horn, a highly prized commodity in traditional Asian medicine. The largest threat they face is poaching to fuel the international rhino horn trade. Apart from poaching, habitat destruction and loss for agriculture and development are further threats to the rhino populations.

With a declining population, tigers are classified as endangered species globally by the International Union for the Conservation of Nature (IUCN). The existing subspecies are Bengal, Indochinese, Sumatran, Siberian, and Malayan. It is estimated that only around 3,500 tigers remain in the world.

With habitat destruction, reduction of prey population, and limited habitat area, tigers are forced to contact humans of the nearby village or farms. Due to this, tigers are injured or killed sometimes. Because of being rare, tigers are considered to be extremely valuable. Poaching is one of the immediate threats to tiger species. Their internal organs are being used by some Asian countries as folk medicine and traditional remedies. Besides this, tigers are also poached for their organs, bones, and pelts (skin with fur), and such items are being sold as prized possessions in the underground black markets.

The Asian elephant is classified as Endangered by the International Union for the Conservation of Nature (IUCN). Its population has declined by an estimated 50 per cent over the past 75 years, and there are about 20,000 to 40,000 Asian elephants left in the wild.

The biggest threat to Asian elephants is habitat loss and fragmentation due to the overpopulation of humans and economic growth has led to encroachment into places where elephants live. Poaching remains a threat to elephants in many areas. There is also a steady market for other elephant products, such as skin, tail hair, and meat, which continues to fuel poaching, a significant threat to already small elephant populations found in many of these countries.

We currently classify hawksbill turtles as Critically Endangered by the IUCN and are facing an extremely high risk of extinction in the wild in the immediate future.

Just like other animals, the hawksbill turtle faces many threats. Hawksbill turtles have been prized for their beautiful carapace. Their scutes, streaked and marbled, are fashioned into jewellery and other decorative items. In addition, hawksbill turtles are harvested for their eggs and meat for human consumption. In many countries, it takes hatchling hawksbill turtles from nests and is kept as pets. Coastal development results in significant beach erosion and loss of crucial nesting habitat. An increase in global temperatures and associated coral bleaching events have had a devastating impact on coral reefs and hawksbill populations.

While some of the other river sharks are also known to inhabit saltwater, the Ganges shark is only found in rivers and possibly estuaries, with no confirmed records from oceans or seas. It is amongst the 20 most threatened shark species and is listed as a Critically Endangered species in the IUCN Red List. The factors for their overall decline in population size are overfishing, poaching, habitat destruction, increases in river use, and pollution. Ganges shark has been and is currently being fished into the Ganges-Hooghly River system for their jaws to be traded in the international trade as curios.

A native tree to tropical Africa, these trees can also be found in India. This tree is an unusual life-giving tree. It only sprouts leaves for 3 months of the year and stores water in its broad and twisted trunk. Climate change and overdevelopment have destroyed its natural habitat. Rainfall patterns in Africa, where all baobab trees can be found, have completely changed because of global warming. Since towering baobab trees require and often store enormous amounts of water, this has put them into a dangerous situation at critical times of their annual cycle.

Dragon trees are native to Cape Verde, Morocco, Spain’s Canary Islands, and Madeira, Portugal, but can also be found in Africa. The tree is categorised as Vulnerable by the International Union for Conservation of Nature’s Red List of Threatened Species. Threats include the loss of their habitat to ranching and farming. A changing climate that is drier than in previous years, with shorter periods of low-lying clouds and mist, is causing some dragon trees to stop flourishing in their original habitats. Due to this, they are steadily disappearing from the continent.

Mangroves are vital to coastal communities as they protect them from damage caused by tsunami waves, erosion and storms, and serve as a nursery for fish and other species that support coastal livelihoods. But according to the first-ever global assessment on the conservation status of mangroves for the IUCN Red List of Threatened Species, more than one in six mangrove species worldwide are in danger of extinction due to coastal development and other factors, including climate change, logging, and agriculture.

Native to the deserts of South Africa, this is a 2-leaf plant. The leaves grow in length and tangle as the plant ages. But because of societal advancement, they were destroyed as a part of land development, and climate change is slowly getting rid of the last of these plants.

Also known as Agarwood, is native to Northeast India, Bangladesh, Bhutan, and parts of Southeast Asia. The resin extracted from the wood is widely used in perfumes and incense. They classified the tree as critically endangered by the International Union for Conservation of Nature (IUCN) due to logging, deforestation, and exploitation due to its economic value.

Thus, it becomes necessary for every individual to take part and contribute towards protecting the environment. We need to adapt to the changing environmental and urban needs to maintain a healthy co-existence of the environment and humans. These species of living beings are on the verge of extinction, it’s only with collective effort that things will change for the better.

The insensitive approach towards the environment needs to be replaced with ideas that promote economy and development simultaneously. The environment should not be seen as an impediment we should conserve growth and natural resources to complement our social and cultural environment.

The need to make adjustments in our way of living is at a point of utmost priority.